One of the first of my friends was a tarot reader. Her cards usually came with a paperback book, and sometimes they would come with a DVD. I loved the books and would read them cover to cover. The DVD was slow, though, and I never really watched it even if it was provided. Now, I watch videos of tarot readers reading their books, and I find myself enjoying them more.

There are a lot of real-life situations we never dream ourselves into. So, why not live our lives out on the page? This is the concept behind the Elemental Power Tarot, a deck that pulls real life situations from the headlines into its cards. The cards fall under the many elemental archetypes.

One of the greatest challenges in life is maintaining balance. In this tarot, there are cards that represent the four elements of fire, wind, water, and earth. These cards are symbolic of the four most important aspects of life: our present circumstances, our beliefs, our future, and our relationships with others. 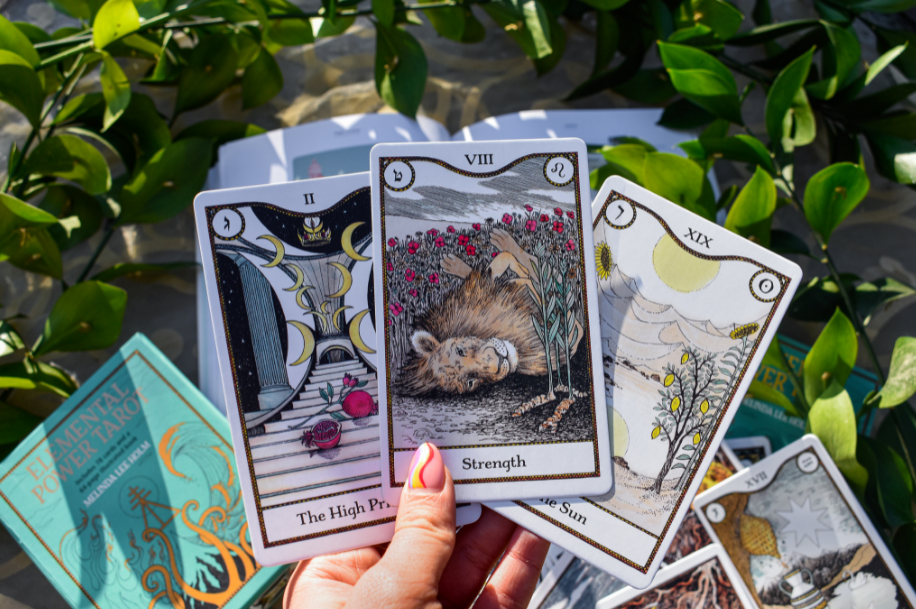 First of all, I want to say that I love this deck. The Power of Elements Tarot comes with a great guide, and Melinda Lee Holm’s illustrations are phenomenal. (Oops – incorrect statement; she’s not an artist, but I’ll leave that sentence to illustrate my point. I will indicate proper authorship later in this review]. The quality of the product is impeccable – nice matte finish, excellent quality cardboard, packaging, full color instructions, everything. Just look at the design on the back of the card. I like it. Some reviewers are dissatisfied with the quality of the map material, but I had no problems with it. I also like the non-traditional size of the cards (at least for tarot decks). To me, the problem is a misunderstanding of how a publisher can set consumer expectations. It’s not fair to put the responsibility on the artist/maker of the deck. So the responsibility lies with whoever was responsible for the marketing and promotional materials for this game. Yeah, I’m being intentionally cryptic right now. You’ll soon see what I mean. Let’s start with how I came up with this deck.

A tarot reader I know wanted to do a little experiment with me. He gave it to me: I want to send you the deck, but first you have to promise me that you won’t look for any information about it, you won’t read any reviews, and you won’t try to find pictures of the cards in the deck, okay? The only thing you are allowed to look at before receiving the game is the publisher’s marketing text and the pictures of the sample cards on the box. Is that good? I shrug my shoulders. Yes, of course. He sent me the promotional pictures of the cards and the game box provided by the publisher that contained the cards he had selected. By the way, a side note: In fact, this guide is well written and full of information.

In fact, in all the marketing and promotional material for the game published by the publisher, only the Great Arcana cards, the Aces and the Court cards are shown. For some reason I overlooked this detail and thought I was getting a fair representation of the whole game. And I can’t put my excitement into words. Wow, just wow. This bridge is going to be epic. No, this game is just epic. The artwork, the concept, even the graphic details of the borders and layout, and the inclusion of cabalistic and astrological correspondences – yes, everything! Also note that key 8 represents power and key 11 represents justice. Oh, so we have a game based on RWS, huh?

How can you not immediately fall in love with the art of this game? The principle here is the elimination of human figures from the Tarot and the reduction of each Tarot key to its elemental powers. You will see scenes based on the five elements – fire, water, air, earth and spirit. Holm has written this guide in an exemplary manner. If you buy this game, the text is worth reading. The content reflects a deep understanding of Western esotericism. Melinda Lee Holm considers herself a tarot priestess. She is a professional tarot reader and is involved in makving talismanic jewelry and magical art. I am in love with this hierophant card. There is a slight hint of the traditional papal map at the top of the shrine. The cat is cute. And the Lovers card that I, oops, ripped out of my photo expresses this through polar furnishing styles. (You can go back to an earlier photo to see the full button 6). The second-person narration draws you right in. I love the guide sections for each record on the map. Oops, oops, correction.

The creator of the game is Melinda Lee Holm, and you can find her signature everywhere. Because the illustrator’s name is less visible, I first thought the illustrations were by Holm himself. Only when I read the description of the game carefully, I understood from a short line that the illustrations were by Rohan Daniel Eason. Eason’s artistic inspirations are primarily traditional woodcuts and prints, which lend themselves well to contemporary alchemical art. They are drawn by hand, and his main drawing medium is pen and ink. I can feel your feelings now. =) You love this game, don’t you? I mean, how could I not. The artwork is everything. You can’t contain your excitement. This is my only reason for choosing a deck – its marketing and promotional material. You should have shown at least one or two pip cards, like the five of a kind among majors and aces, right? Why couldn’t the eight of swords be included in the map images in the promotional material? I have mixed feelings, because on the one hand I don’t mind the design of the piping.

They are illustrated, it seems. They undoubtedly resemble the corresponding elements, for each colored figure card has exactly the same background, only the number of chalices, or swords, or whatever, in a different ornamental arrangement. Considering how much I love Majors, I’d probably still want to buy this deck, despite the design decisions in Pips. Fortunately, the site plans are intuitive and easy to understand. Before I consulted the guide, I could guess who the page, the horse, the queen and the king were. Nowhere in the marketing text or product description will you find a line indicating that it is based on TdM. And even as a ToM-inspired game, the repetition of background images as copies just seems….. sloppy. It’s as if the person who made this film didn’t and couldn’t care about anything more than what you see here. Even the historic bridges of Marseille show more variation in ornamentation.

And perhaps if the guide were to describe the symbolic meaning of these arrangements, as in the Ettheila games or the occult games of the 19th century….. …uh, no. Nothing. But that doesn’t mean I don’t like the content. I love the short summary for each test, the excerpt from the textbook, and the challenge notes. Given what’s missing, I have to assume there was no intent or logic to the placement of the beams, chalices, etc. And if it did, I would consider that critical information that should be included in the manual. The colored coin image cards are a bit messy and chaotic if you are picky and discerning.

I like that there are a few different designs of gold coins here on the Pips, but the same background that keeps getting copied and pasted into all the costumes just seems lazy. It’s not like a creative labor of love. And it was my friend’s experiment to document the consumer’s perspective and emotional reaction to the marketing copy of the deck, versus seeing the full deck itself. This thing is a disappointment that could have been avoided. Accurate representation of the Minor Arcana cards! Set the right expectations. Don’t hide things from people who will find out anyway. For example, why. Why? If I saw the Three of Pentacles and the Seven of Wands among the promotional images and bought the game because of Eason’s beautiful art and Hill’s writing, I would be absolutely delighted. But because consumers feel cheated by this kind of marketing, it creates unnecessary resentment.

Just say it’s a ToM game. Anyone who decides to buy the tickets will be happy with them as they are. The fact is that nobody likes to feel cheated. And looking at the sample cards on the box and the promotional videos for the game, you can’t help but think that the publisher intentionally set the cards a little too low. It’s not like all the cards randomly chosen for the picture on the box are majors and aces. Melinda Lee Holm’s impressive tarot knowledge (easily understood from the guide) and Rohan Daniel Eason’s alchemical illustrations inspired by woodcuts and engravings could make Tarot of Elemental Power the next big thing in the tarot world this decade. This could have been the Wild Doom of the 2020s. Everyone will be praising this game. Sigh. Missed opportunity.

How do you load…

A long, long time ago in a magical land called England, among the elves and the dwarves, there was an amazing book of magic called the Elemental Power Tarot. Like all great Tarot decks, it was drawn from the deep well of ancient wisdom and hidden away by the wise elves.. Read more about elemental power tarot deck and let us know what you think. 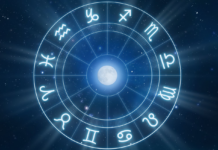 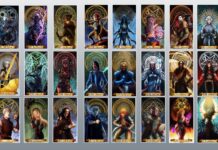 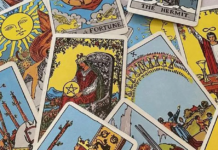 In Defense of the Tarot Card-of-the-Day